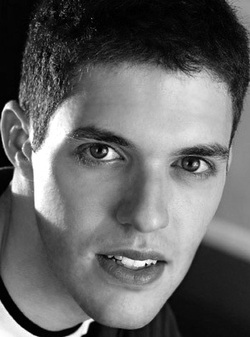 MICHAEL ABOURIZK  (Michael Abourizk) is a New York City-based, Arab-American actor.  The son of a Lebanese immigrant and a Jersey farm girl, Michael really had no choice to grapple with this unique genetic identity crisis than through acting.  He began at the age of 3, when, inspired by his older brother’s first-grade play, he arose from the audience, and walked right onto the stage, announcing it was “his turn.”  The onslaught of outstretched hands ousting him off the stage did not deter him; in fact, it laid the foundation for a career on the stage, as well as a proclivity for graceful exits into the wings.
Following his debut (see above), Michael began his training under the tutelage of Tobi Silver.  Making his way to New York, he has since performed Off-Broadway, Off-Off Broadway, and even further off of the Great White Way as New England, basements in the East Village, and for the benefit of his bathroom mirror.  He is a proud member of Nicu’s Spoon Theater, where he most recently performed the role of Ste in their production of Beautiful Thing.  Fluent in French (no, seriously), he performed an all-French-speaking Madame in a bilingual production of Jean Genet’s The Maids.  He originated the role of Shay in the world premiere of KS Stevens'  Butch Mamas!
He continues to perform a one-man show adaptation of Oscar Wilde's The Picture of Dorian Gray, written and helmed by Darya Gerasimenko; most recently Off-Broadway at Theatre ROW as part of the international United Solo Theatre Festival.  Other credits include numerous readings and one-act play festivals, and he has recently delved into voiceover work, having lent his voice to several online projects.  He is a Milo Award-recipient for the Park Road Playhouse’s The Lion in Winter (in which he played John, not the Lion, in case you were wondering) in his native Connecticut. He holds [in his left hand] a BA in Dramatic Literature and French from New York University; and, in his right hand, his tap shoes . . . because he does that as well.