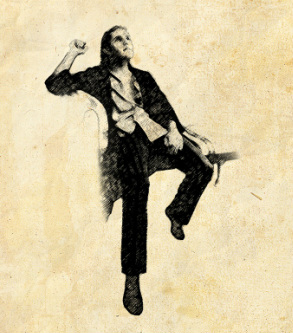 "[The] one-man adaptation of Wilde's novel [features] an amazing performance from Michael Abourizk.  Abourizk will sometimes play two or more characters in the same scene . . . there are magical moments when Abourizk changes personas.  [He] switches fluidly between Dorian, Basil, and their cynical friend Lord Henry as they spout clever quips and Victorian philosophy."

-TheaterForNerds.com review of The Picture of Dorian Gray

"Michael Abourizk seamlessly shifted personalities from the impressionable young man to his urbane tutor . . . . the rendition of Lord Henry was impeccable: witty, cruel, and compelling, with an air of cynical sophistication."

-Upstage review of The Picture of Dorian Gray


"This [play] sure had its show-stealers.  The stuttering comic, Frapper (Michael Abourizk) literally left me in tears of laughter as he delivered outstanding performances whenever he was onstage."


“Michael Abourizk avoids this unending trap of verboseness, making the scholar, Trofimov, quirky and fun.  Instead of tedious, Abourizk breathes life into Trofimov and makes sense of his character.”

-TheaterThatMatters.com review of The Cherry Orchard

“Both Michael Abourizk and Trip Langley go a long way toward suggesting their characters’ inner torment. They provide the tentativeness where Harvey’s play provides only forward motion . . . the two work very well together, sharing a naïveté and the feeling of what it means to be ostracized. Their scenes together provide the heart of the show.”

“Ste’s uncertainty and fear are palpable as Abourizk tentatively maneuvers his way from his abusive home to Jamie’s comfort to his own demons and back again.”

“Michael Abourizk, the youngest member of the cast, commits fully to his unattractive role.”

- Hartford Advocate review of The Lion in Winter